2 x 20MHz of LTE and the Heisenberg Uncertainty Principle 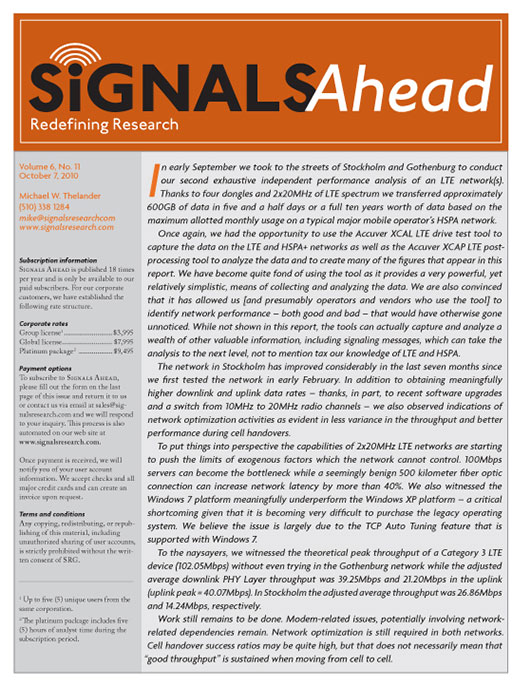 2 x 20MHz of LTE and the Heisenberg Uncertainty Principle

In early September we took to the streets of Stockholm and Gothenburg to conduct our second exhaustive independent performance analysis of an LTE network(s). Thanks to four dongles and 2x20MHz of LTE spectrum we transferred approximately 600GB of data in five and a half days or a full ten years worth of data based on the maximum allotted monthly usage on a typical major mobile operator’s HSPA network. Once again, we had the opportunity to use the Accuver XCAL LTE drive test tool to capture the data on the LTE and HSPA+ networks as well as the Accuver XCAP LTE post-processing tool to analyze the data and to create many of the figures that appear in this report. We have become quite fond of using the tool as it provides a very powerful, yet relatively simplistic, means of collecting and analyzing the data. We are also convinced that it has allowed us [and presumably operators and vendors who use the tool] to identify network performance – both good and bad – that would have otherwise gone unnoticed. While not shown in this report, the tools can actually capture and analyze a wealth of other valuable information, including signaling messages, which can take the analysis to the next level, not to mention tax our knowledge of LTE and HSPA. Given the breadth and depth of this analysis we have divided the report into two parts, although it will only count as a single issue toward your subscription.

We are planning 1-2 more issues stemming from this trip, including a look at LTE network scheduling efficiency – a project that leveraged the Sanjole WaveJudge LTE tool to collect the data and do the analysis. Specific topics in this report include the following: The KPIs. In addition to the typical downlink and uplink data rates, we looked at a number of other KPIs, including CINR, RSSI, resource block allocation, modulation scheme (Antenna 1 and Antenna 2), MCS assignment, MIMO Rank Indicator, uplink transmit power and BLER. Further, during the post-processing phase we analyzed these KPIs by several different means, including, throughput versus CINR, uplink throughput versus transmit power, CINR versus RSSI, handover success rate, throughput during a handover, and CINR versus modulation scheme, to name a few. The Data. If your organization is interested in obtaining the complete set of raw data, please contact us for licensing information. Comparing the Differences. We present a wealth of information that allows readers to directly compare the performance of the two networks that we tested and to demonstrate how/if the network in Stockholm improved in the last seven months. The Appendix. In total, the report contains 68 figures or tables. In order to not over burden the reader with a ton of information, we include many of the figures in the appendix for future reference.