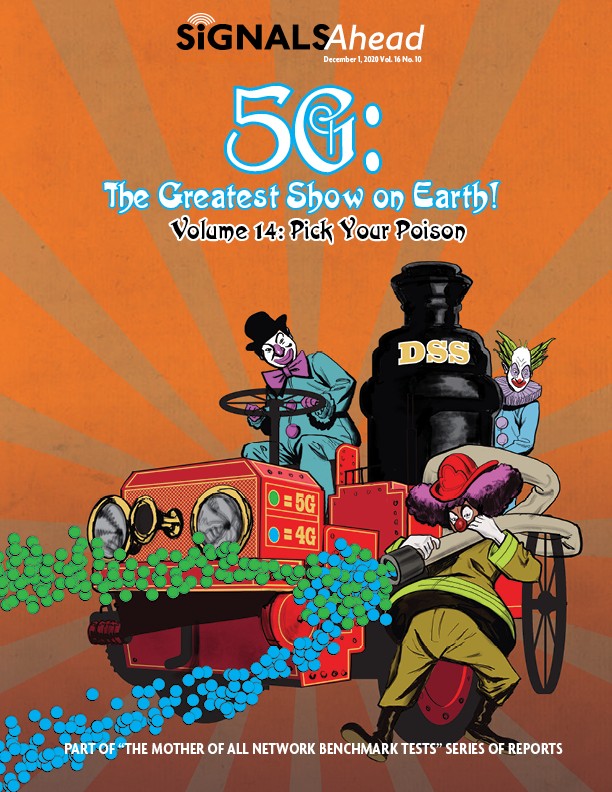 SRG just completed its fourteenth 5G benchmark study, this time with a focus on Dynamic Spectrum Sharing (DSS), based on Verizon’s networks in Minneapolis (CRS-RM) and Oklahoma City (MBSFN), as well as AT&T’s network in Plano, Texas (CRS-RM).

Our Thanks.  We did this study in collaboration with Accuver Americas, Rohde & Schwarz, and Spirent Communications who provided us with their respective test equipment and platforms, which we identify in the report.  SRG did all the testing and analysis of the data and we are solely responsible for the commentary in the report.

Our Methodology.  We tested with smartphones that supported 5G NR DSS as well as smartphones that we locked to LTE Band 5 – the same band the operators were using for DSS.  We filtered data to those times when all smartphones were receiving data traffic and attached to the same PCI, plus we limited our analysis to the DSS band to eliminate the impact of other bands on the results.  We did drive tests, stationary tests, and tests with LTE and 5G NR DSS smartphones in adjacent cells to evaluate the potential impact of interference.

Optional, yet Mandatory.  Operators clearly favor the CRS-RM implementation but they aren’t using any flavor of DSS if they don’t need to use DSS.  Further, just because a particular band has DSS today, doesn’t mean it will have DSS tomorrow.  Ultimately, unless an operator wants to commit a radio channel to LTE for the next decade, they will have to use DSS at some point.  5G NR carrier aggregation and SA (standalone) will accelerate the use of DSS and make the technology more interesting.

CBRS was a Bright Spot.  Verizon has leveraged CBRS spectrum for LTE, and its impact on total throughput was significant, dwarfing the modest contribution from low band 5G NR.  Yes, the smartphones support simultaneous use of CBRS and 5G NR – the former provides the bulk of the data speeds and the latter, along with the LTE anchor cell, provides the 5G icon.

Overselling Low Band 5G NR.  Even in a perfect world, with no DSS inefficiencies, a low band 5G NR channel will perform no better than LTE for eMBB use cases, all things being equal.  The same statement is true for a dedicated low band 5G NR radio channel.  This reality hasn’t prevented operators from hyping their low band 5G NR networks, which does a disservice to 5G and hurts consumers in the long run.

Sidebar Study.  We used a R&S scanner to look at 5G NR coverage between T-Mobile (Band n71) and Verizon (Band n5) in Minneapolis and Oklahoma City.  We observed big differences between the two operator’s networks and between the two cities, not to mention between the online coverage maps and the coverage we observed.  Good Coverage <> Quality Coverage