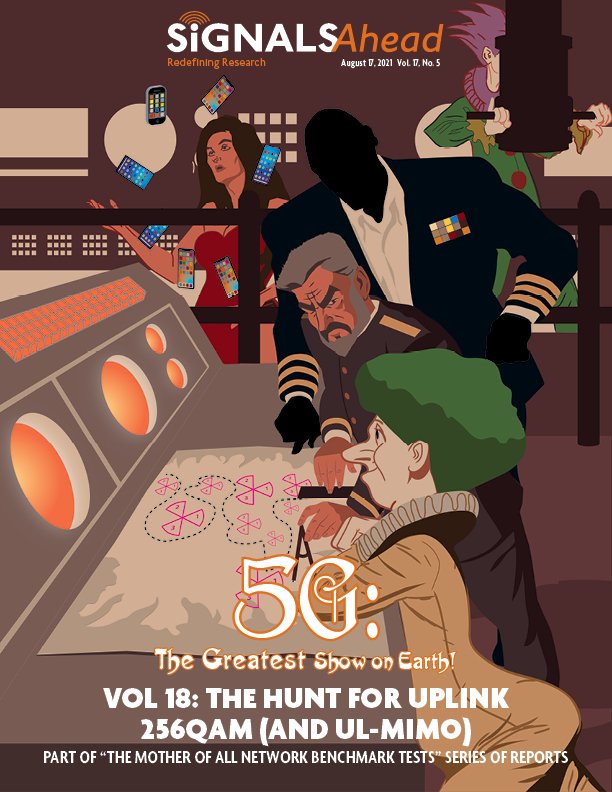 SRG just completed its eighteenth 5G benchmark study, this time with a focus on two 5G NR features (UL-256QAM and UL-MIMO), which can result in much higher uplink user data speeds and increased spectral efficiency. We tested these features in T-Mobile’s commercial Band n41 network in Buena Park, CA where Ericsson is the infrastructure supplier. Separately, we include results from a 5G NR network coverage study that we conducted in two US markets.

Our Thanks.  We did this study in collaboration with Accuver Americas (XCAL-M and XCAP), Rohde & Schwarz (TSME6 scanner) and Spirent Communications (Umetrix Data). SRG did all the testing and analysis of the data and we are solely responsible for the commentary in the report.

Background.  T-Mobile is preparing to launch UL-256QAM and UL-MIMO across its nationwide Band n41 network. The operator is likely the first in the world to introduce these features and SRG is definitely the first organization to publish an independent assessment of the features.

The Devices.  We tested with the Galaxy S21 Ultra, the LG Wing (UL-256QAM) and the OnePlus 9 Pro (UL-256QAM and UL-MIMO). Although the functionality we tested is well-defined in the standards, there is a device/chipset requirement that the industry has not yet fully embraced. We believe the OnePlus is the only smartphone which supports both features. Hopefully, the results of our study will prove to be the catalyst to move things forward.

Data Collection.  We tested in a multi-cell Band n41 cluster that also supported the Standalone (SA) architecture. We tested at fixed locations with varying RF conditions as well as along a 17.2 km drive route that included a full range of RF conditions, including seamless handovers between Band n71 (also SA). We tested devices in parallel to evaluate spectral efficiency differences and separately to quantify differences in peak performance. We also included low bit rate applications as part of the study.

Data Analysis.  We time binned and area binned the data to allow an apples-to-apples comparison of the results between smartphones, including filtering of data to ensure smartphones were all sending data and attached to the same cell site. We analyzed spectral and resource block efficiency as a function of RF conditions and how frequently the smartphones used the uplink enhancements. We also looked at current efficiency on how these features impact battery life.

Headliner Results.  Although aggregate performance over all RF conditions matters the most, we documented a peak uplink data speed of 223 Mbps with the OnePlus 9 Pro, followed by the LG Wing (108.2 Mbps) and the Galaxy S21 Ultra (86 Mbps). Put another way, we witnessed a 2.6x increase in uplink data speeds versus what consumers enjoy today.

5G NR Coverage.  With the TSME6 scanner we evaluated 5G NR network coverage for the four nationwide 5G NR networks in the US in two US markets. We focused on signal quality (SINR) versus signal quantity (RSRP). The low band networks could suffer from too much of a good thing (coverage), resulting in higher interference, while the mid-band network coverage was surprisingly good.