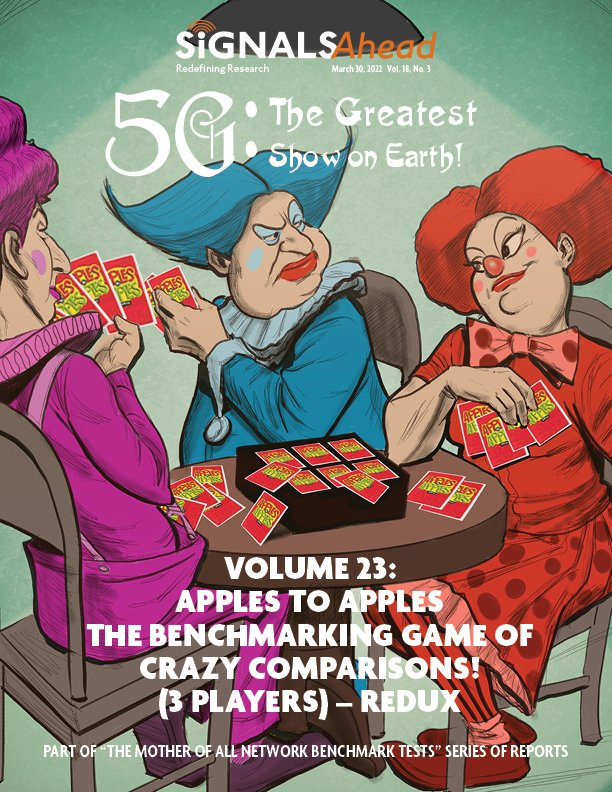 SRG just completed its 23rd 5G NR benchmark study.  For this endeavor we collaborated with Rohde & Schwarz to conduct a multi-operator benchmark study, based on ETSI TR 103 559.  This study repeats an earlier study that we published in early 2021.  Although the market where we tested and the operators involved remained the same, the results were completely different.

Our Thanks.  We did this study in collaboration with Rohde & Schwarz.  R&S collected the performance data on our behalf while SRG analyzed the data based primarily on the inherent capabilities of the R&S Smart Analytics tool.  SRG takes sole responsibility for the analysis and commentary provided in this report.

Our Methodology.  Testing took place in early February in the Dallas – Fort Worth market using the AT&T, T-Mobile and Verizon networks.  We used 3 smartphones per network (voice = 2; data = 1) and R&S scanners to collect the data.  In total, there were 115 hours of testing, ~1,300 voice calls per network, and more than 60,000 data sessions.  We separately compared T-Mobile NSA versus T-Mobile SA performance.  Results of the study leveraged ETSI TR 103 559 to provide an industry-accepted and repeatable set of results.

The Results are in.  This study mirrors a similar study that we conducted in 2021, making it possible to provide comparative analysis on year-over-year network performance.  In our 2021 study, AT&T came out on top, followed by Verizon with T-Mobile lagging well behind.  In this most recent study, T-Mobile took top honors by a considerable margin.  In both studies, the voice results were largely comparable across operators with meaningful differentiation only occurring with the data tests.

Chalk it up to 5G.  All three networks exhibited meaningful increases in the use of 5G.  For T-Mobile, there was a double-digit increase in 5G usage, plus a dramatic switch from Band n71 (2021) to Band n41 (2022).  Interestingly, there was very little Band n77 present for AT&T and Verizon.  The latter is most surprising given what we observed in our last Signals Ahead report, which involved testing in the Minneapolis area.

NSA versus SA.  T-Mobile hadn’t officially launched SA in this market but that didn’t prevent us from separately testing the new architecture – we excluded these results when comparing performance with the other two networks.  Suffice it to say, the SA performance wasn’t as good as NSA, both in terms of throughput-related metrics and latency-related metrics.  The ETSI framework focuses on the user experience, but there is still a throughput and/or latency/jitter component with most use cases under test.

Video Rules.  All operators exhibited good performance gains with video, in particular increased use of higher resolution videos with YouTube streaming.  In 2021, 720p was about as good as it got (360p on T-Mobile) while in 2022 there was a high percentage use of 1080p and up to 1440p/2160p in some cases.