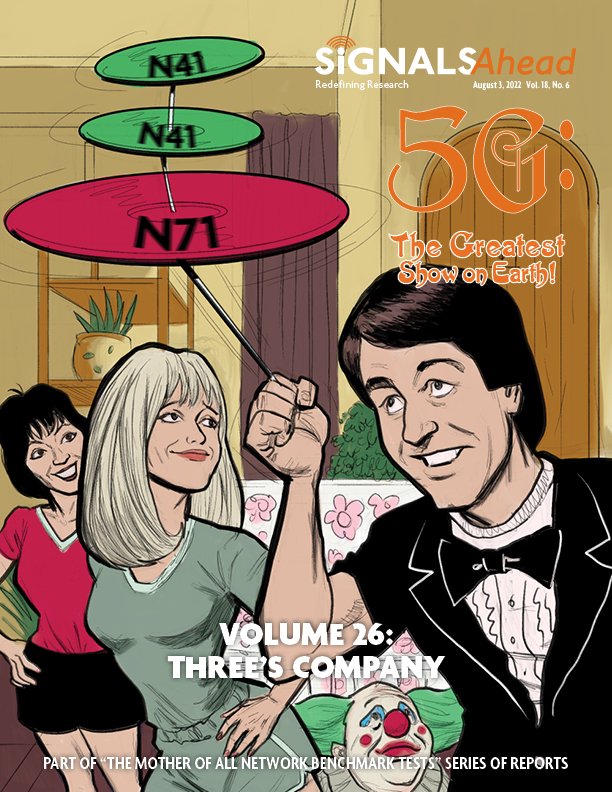 Our Thanks.  We did this study in collaboration with Accuver Americas (XCAL-M and XCAP) and Spirent Communications (Umetrix Voice and Umetrix Data). SRG is responsible for the data collection and all analysis and commentary provided in this report.

Our Methodology.  Testing took place over a three-day period in early July. We had access to a T-Mobile 17-site test cluster that is part of its commercial network. Using a Galaxy S22 with pre-release software that supported 3CC and SA we did comparative drive testing with a Galaxy S21 smartphone that was limited to 2CC. We also forced this phone to operate in NSA mode.

Four Areas of Focus.  We looked at 3CC peak performance in an “empty network”, mapped SINR and RSRP to the distance to the serving cell(s) for both n71 and n41, documented the incremental benefits of using Band n71 FDD as the anchor carrier with Band n41 serving as the secondary cells, and evaluated the performance attributes of the Galaxy S22 and Galaxy S21 smartphones.

FDD-TDD Advantage.  We once again observed the benefits of using FDD as the anchor band to help extend and improve Band n41 coverage and performance. For us, the challenge remains finding locations in the network where the feature is necessary.

n71 Versus n41.  By knowing the exact locations of the serving cell sites we were able to show the relationships between Band n41 and Band n71 RSRP and the distance to the serving cell. We show that in a network designed for capacity (not simply coverage) the penalty for using mid-band frequencies for 5G are overstated (although real). Further, we once again show that low frequencies may be great for coverage but the mid-band frequencies actually deliver overall better network quality.

S21 Versus S22.  For us, this analysis proved to be the most interesting. Although the two phones performed largely the same over all network conditions, there were obvious differences in how they achieved their respective results. Further, one smartphone tended to perform much better with more favorable RF. We’ll let you guess which one.