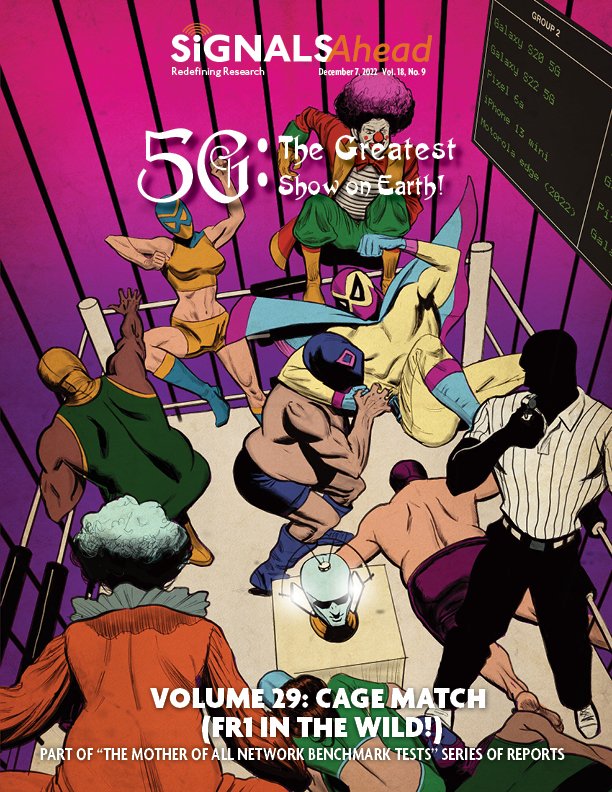 SRG just completed its 29th 5G benchmark study.  For this endeavor we collaborated with Accuver Americas and Spirent Communications to conduct an independent benchmark study of several 5G smartphones operating in mid-band 5G spectrum and representing chipsets from MediaTek, Qualcomm, and Samsung.

Our Thanks.  We did this study in collaboration with Accuver Americas (XCAL-M, XCAL-Solo and XCAP) and Spirent Communications (Umetrix Data).  SRG is responsible for the data collection and all analysis and commentary provided in this report.

Our Methodology.  Testing took place on the T-Mobile network (Band n41) in the suburbs of Minneapolis-Saint Paul, MN.  The network is comprised of 140 MHz of Band n41 spectrum (100 MHz + 40 MHz) as well as 5G in Band n71 and the requisite LTE spectrum – primarily Band 66 and Band 2 serving as the anchor cell.  We tested the smartphones in pairs with the Galaxy S22 serving as the reference smartphone used to evaluate performance of the other smartphones in the mix.

The Scope.  We used the Galaxy S22, Galaxy S20 Ultra, iPhone 13, Google PIxel 6a, Galaxy A13, and Motorola edge (2022) smartphones.  These smartphones represent 5G chipsets from MediaTek, Qualcomm and Samsung.  GIven some limitations in logging detailed chipset data, we included a mix of physical layer and application layer results in our analysis

A New Sheriff in Town.  Based on our analysis of the results, we declare the iPhone 13 as the “unofficial” top performing 5G smartphone of the group.  We include the “unofficial” disclaimer because our analysis was limited to application layer throughput with this phone since we weren’t able to log chipset data.  Given the network pushed most of the traffic to Band n41 on the S22, we assume it behaved the same way with the iPhone, meaning potential differences in LTE performance between the two phones wouldn’t explain the overall results we observed.

LTE is becoming less relevant on the T-Mobile network.  In addition to 5G Band n41 carrying the super-majority of the total traffic, the 5G network is quickly moving to the standalone (SA) network architecture as the default architecture, even with Band n41.  This situation means LTE is becoming inconsequential, especially for those smartphones that support SA mode in Band n41.

Making Up for Lost Time.  We know (and we keep getting reminded) that our publishing schedule hasn’t been as frequent as our readers would like.  Never fear, we are doing two test campaigns this week (PC1.5 and MU-MIMO) with the results forthcoming in two Signals Ahead reports.