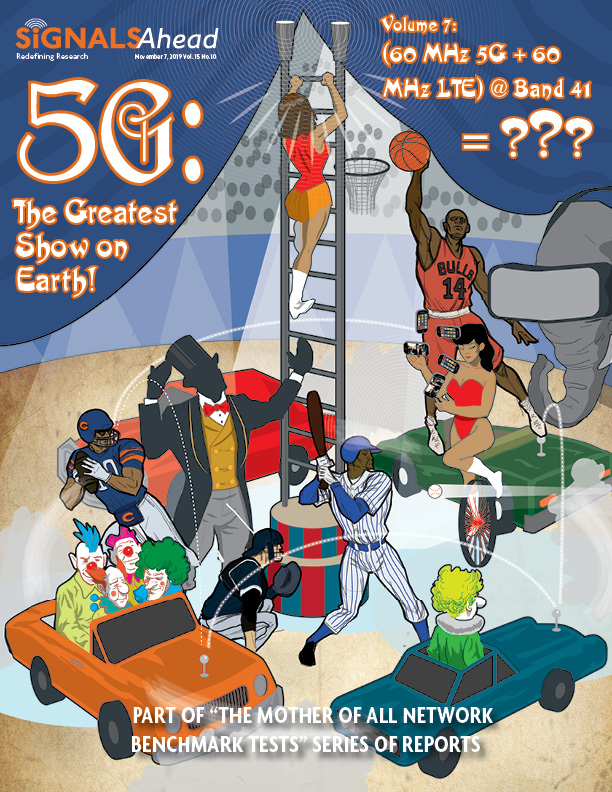 SRG just completed its seventh 5G benchmark study, this time with a focus on Sprint’s 5G network, which is deployed in Band 41, alongside 60 MHz of LTE in the same band. For this study we used two Samsung Galaxy S10 smartphones and two LG V50 smartphones while testing in the Chicago metro area.

Our Thanks.  We did this study in collaboration with Accuver Americas, PCTEL and Spirent Communications who provided us with their respective test equipment and platforms, which we identify in the report. SRG did all the testing and analysis of the data and we are solely responsible for the commentary in the report.

Our Methodology.  We tested over a 3-day period, logging both chipset and scanner information while driving or walking around the Chicago metro area. We included multiple scenarios (5G versus 5G, 5G versus 4G, S10 versus V50, standalone 5G, etc.) with each scenario typically involving the transfer of tens, if not hundreds of Gigabytes of data.

5G provided a significant increase in throughput over LTE.  Although we didn’t quite hit the proverbial 10x gain (median over all test results), we came much closer than we have in the past. Disparities in the 5G and LTE channel bandwidth was a factor.

Both phones had a difficult time remaining attached to 5G.  Sprint’s LTE network is heavily loaded and there are a large number of micro cells and Magic Boxes that don’t support 5G. An optimized solution to better utilize 5G is in the works.

EN-DC with split bearer functionality was seldom available.  At the time we were testing the operator and vendor were testing enhanced features to make better concurrent use of 5G and LTE while taking into consideration the high loading on the LTE Band 41 network. This feature is now in place, but we haven’t tested it. The absence of an additional 60 MHz of spectrum serving a mobile phone had a big impact on observed throughput (5G + LTE).

The LG V50 made far better use of network resources than the Galaxy S10.  Observed data speeds over extensive periods of testing were mixed for the two phones, but on two separate days of testing, the LG V50 achieved its throughput with meaningfully fewer network resources (Resource Blocks). Implications for a poorer performing device are lower data speeds in a lightly loaded network and lower throughput for all mobile devices in a capacity constrained network.