A Few Highlights from the RAN#91e Plenary 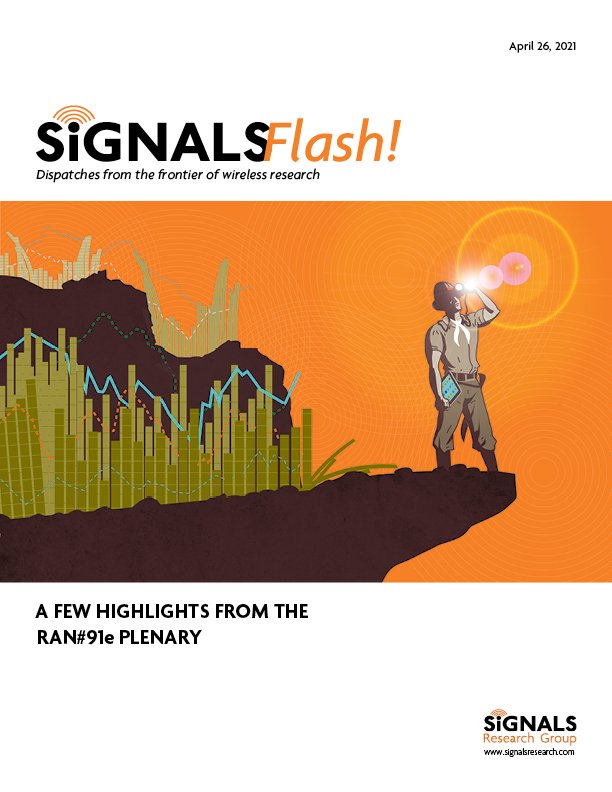 A Few Highlights from the RAN#91e Plenary

In late March, 3GPP held its RAN #91 electronic plenary. In addition to electing new leadership, the plenary made several important decisions on 5G NR functionality (Release 17) that we would like to highlight in this Signals Flash report.

Patience is a Virtue. For our Signals Ahead subscribers who are looking for the next Signals Ahead report, all we can say is patience is a virtue. There is a lot of effort going into the next report and given the uniqueness and relevance of the study, we are confident it will be worth the wait.

RedCap. Reduced Capability (RedCap) devices fall in between eMBB and URLLC – wearables are a great example of a RedCap device, or UE (user equipment). To date, the big debate has involved the minimum number of receiver antenna ports (1, 2, or 4) as well as the minimum/maximum channel bandwidth. Problem solved!

DSS. Dynamic Spectrum Sharing (DSS) remains a hot topic since it is a key requirement for most operators (either now or at some point in the future). The current debate focuses on how to optimize its performance, which also requires a clear understanding of how it is supposed to perform today.

Relays. Relay functionality involves mobile devices communicating directly with each other, much like exists with V2X and the PC5 interface. The feature, which can involve UE-to-UE or UE-to-Network scenarios, is ideal for extending coverage into out-of-coverage areas to deliver higher data rates and/or improve battery life. Relays are also a critical feature for first responders.