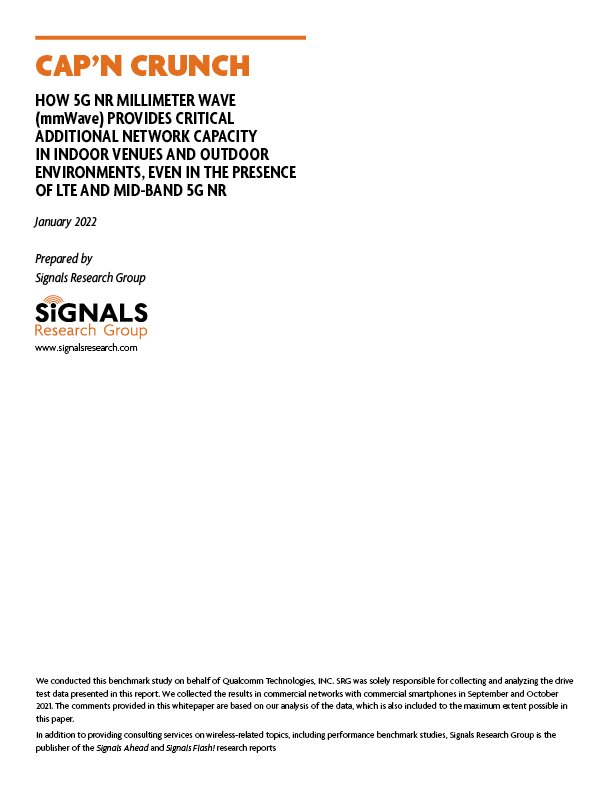 How 5G NR mmWave provides critical additional network capacity in indoor venues and outdoor environments, even in the presence of LTE and mid-band 5G NR

This report provides detailed test results for a mmWave benchmark study that we did on behalf of Qualcomm Technologies, Inc.  The study involved testing in an indoor environment (Footprint Center in Phoenix, AZ – Verizon) and outdoor plaza (Helsinki, Finland – Elisa).

Highlights of the Whitepaper include the following:

Our Thanks.  We did this study in collaboration with Accuver Americas and Spirent Communications who provided us with their respective test equipment and platforms, which we identify in the paper.  SRG did all the testing and analysis of the data and we are solely responsible for the commentary in the report.

Background.  We tested at the Footprint Center in Phoenix, AZ (Verizon), which is home to the Phoenix Suns and a host venue to concerts and other events. We also tested in an outdoor plaza in downtown Helsinki, Finland (Elisa), which was also covered by mid-band 5G NR (Band n78).

Background, II.  In Phoenix, we used 16 Samsung Galaxy S20 smartphones to load the LTE and/or 5G mmWave radio(s), serving the same concentrated area to meaure total downlink/uplink throughput on each LTE band, plus 5G NR mmWave.  In Helsinki, we did LTE/mid-band 5G/mmWave walk testing with a single Asus smartphone for Snapdragon Insiders with up to 19 smartphones placed in 2 adjacent cells to create additional interference.

LTE performance suffers under load.  Although LTE performance is impressive (5-7 bps/Hz in downlink and approximately half that in the uplink), the limited amount of spectrum results in meaningfully reduced user speeds with loading.  Introducing 5G NR mmWave increases total throughput and it provides substantial increases in user data speeds for those smartphones that have 5G NR mmWave functionality.

Coverage is robust.  In an indoor venue, 5G NR mmWave coverage is nearly ubiquitous in the areas where it is intended to provide coverage.  In an outdoor deployment, operators will deploy 5G NR mmWave in high traffic areas where the cell densification is already significant.  A one-for-one overlay won’t necessarily provide ubiquitous mmWave coverage, but it goes a long way toward providing significant capacity over much of the targeted area.

Let’s go to the Video.  In addition to measuring total throughput, we evaluated video performance (live streaming for the uplink and video viewing for the downlink).  With loading in an LTE network, video performance clearly suffered, but could be resolved with the additional capacity offered by 5G NR mmWave.