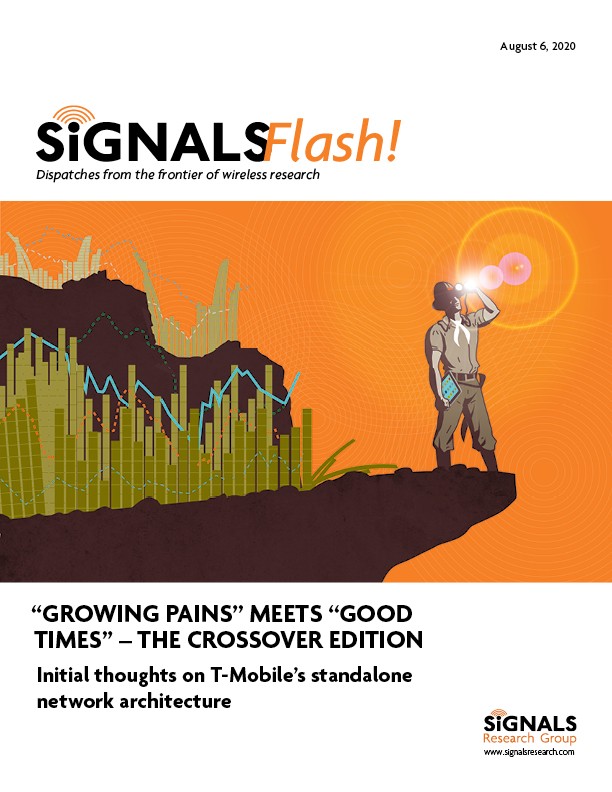 On August 4th, T-Mobile USA announced that it had launched 5G NR nationwide with a standalone (SA) network architecture. Shortly thereafter, we dropped nearly $1,500 on a Samsung Galaxy S20 Ultra at a nearby T-Mobile store to do some preliminary testing. Look for much more in the coming weeks.

Our Thanks. We did this study in collaboration with Accuver Americas and Spirent Communications who provided us with their respective test equipment and platforms, which we identify in the report. SRG did all the testing and analysis of the data and we are solely responsible for the commentary in the report.

SA few and far between. By design, the phone is configured to move between SA and NSA modes, based on mid-band LTE coverage. Despite being in areas with poor mid-band LTE, the phone remained on NSA while in great LTE coverage the phone could use SA, although not all the time. Additional network optimization should address this issue.

Diminished Signaling.  For those times when the S20 Ultra was using SA mode, we observed substantially less signaling than when it was using NSA. The reduced signaling occurred with normal usage as well as when attaching to the network or during 5G NR handovers. The obvious benefit of reduced signaling is an improvement in latency for consumers.

Improved Coverage.  With SA, the 5G NR coverage is based on the propagation characteristics of 600 MHz and not a higher LTE band, such as AWS or PCS. For T-Mobile, this means a 30% increase in 5G NR coverage (LTE coverage with Band 71 remains unchanged). The benefit for any operator really depends on how well it has built out mid-band LTE since low frequencies can’t be used as an anchor with a low frequency 5G NR band.

Improved Performance. We observed a meaningful improvement in 5G NR SA throughput over 5G NR NSA throughput in a region with poor mid-band LTE coverage. Additional testing should confirm if this is a repeatable phenomenon.

The SA Tradeoff.  In urban areas, mid-band LTE coverage is very good so an SA-enabled smartphone should default to NSA. This strategy is great because it would otherwise mean lower user throughput with just a single 5G NR radio channel. Another consequence is that most consumers will not benefit from SA functionality. In less populated rural areas, SA functionality will deliver greater coverage and lower latency.