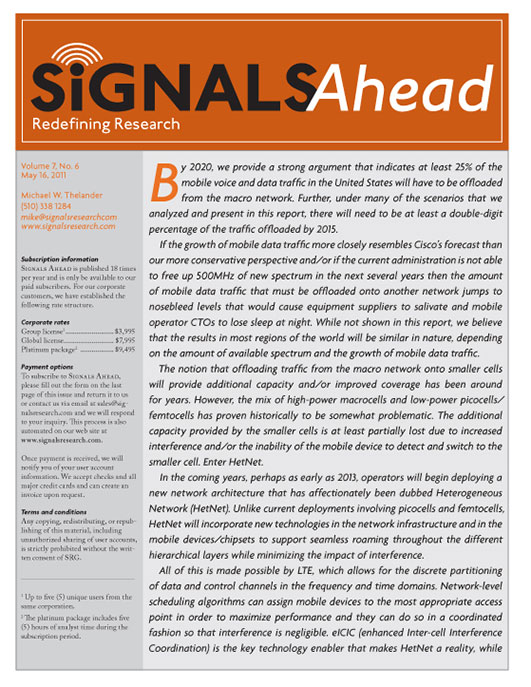 Even under the most optimistic set of assumptions, we demonstrate that by 2020 at least 25% of the mobile data traffic in North America will have to be offloaded from the traditional macro network. Similar results are likely in other markets. This result assumes that an additional 500MHz of new spectrum becomes available in the next several years. If we use assumptions that are more consistent with industry consensus (e.g., mobile data growth) then the percentage is substantially higher, to the point that it reaches nosebleed levels.

Further, the industry cannot afford to sit back and wait since in many scenarios there a double-digit percentage of the mobile data traffic must be offloaded as early as 2015. Something must be done in order to address this dramatic growth of mobile data traffic. Network optimization, advanced cellular technologies (e.g., LTE), and data compression algorithms help, but they may not be enough on their own. Instead, operators will need to offload capacity from their macrocells onto smaller cells. Enter HetNet.

In this issue of Signals Ahead we provide a detailed technical analysis of Heterogeneous Networks, including several ‘modeling perspectives” which demonstrate the clear need for macrocell capacity offload solutions. Specific topics include the following: