Keeping Up With The Jetsons 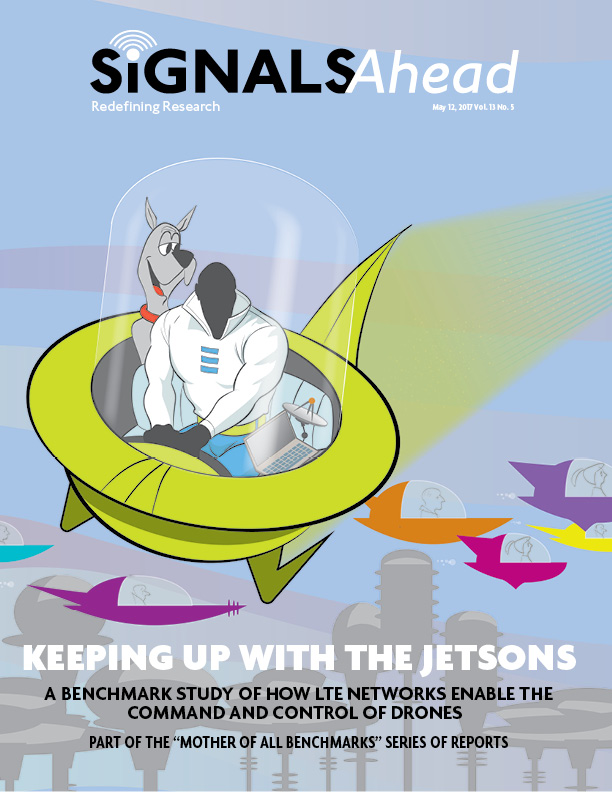 Keeping Up With The Jetsons

In this Signals Ahead report we provide results from the industry’s first independent and in-depth analysis of LTE and its ability to provide command and control (C2) for drones. For this study, we tested the four major US mobile operators.

Our Thanks. This study could not have been done without the support of Rohde & Schwarz who provided us with its TSMA scanner and post-processing software. Additional thanks to UAS Colorado and 3DVistas who provided and piloted the drone used in the study.

Our Approach. We used the R&S scanner to capture downlink parameters (RSRP, RSRQ, SINR) at various elevations up to 400 ft. and in different morphologies. We also conducted some limited flight tests when permissible. Our tests involved all four major US operators and frequency bands from 731.5 MHz to 2150 MHz. Although the uplink (drone to cell tower) could require high bandwidth for certain applications, like streaming video, the downlink is critical for command of the drone.

The Results. At a high level (pun intended), the networks performed better than we initially thought for some bands, but there are significant design considerations for both the eNB antenna system and the UAS antenna system. Further, there are likely changes to the standard that are required to ensure optimal and reliable performance while not degrading the terrestrial cellular network.