LET'S GO TO THE VIDEOTAPE... 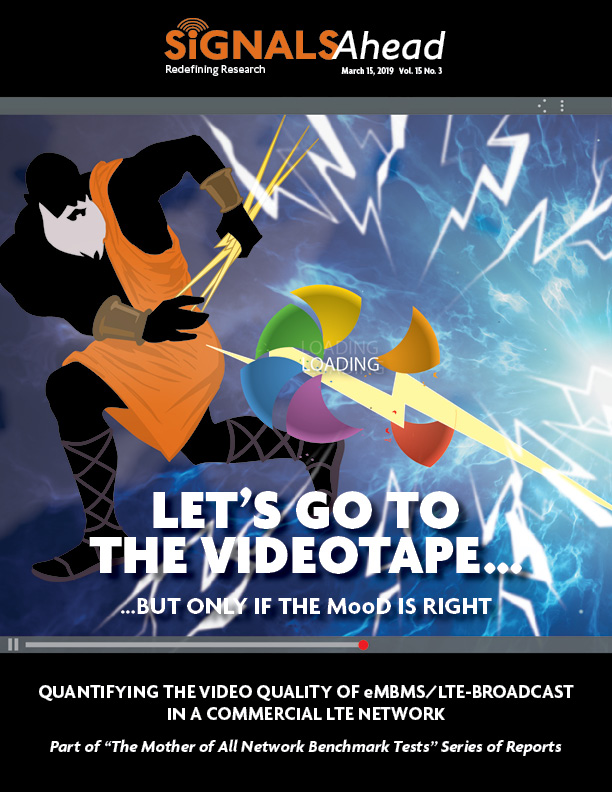 LET'S GO TO THE VIDEOTAPE...

...but Only if the MooD is Right

SRG conducted its second independent benchmark study of LTE-Broadcast and how it compares with unicast delivery mechanisms. For this study, we focused primarily on the video MOS (Mean Opinion Score), which provides an objective quantification of the video quality.

Our Thanks.  We did this study in collaboration with Spirent Communications who provided us with its Umetrix platform to quantify the video quality (VMOS) with a non-reference video.

Our Methodology.  We leveraged Telstra’s commercial LTE network in Australia. We used up to 21 Galaxy S8 and S8 Plus smartphones to generate loading in Band 28. By varying the number of devices using unicast we could compare and contrast the video quality with LTE-Broadcast, which also resided in Band 28.

Background.  This report marks our second benchmark study of LTE-Broadcast. In our first study, we focused primarily on the impact of unicast and LTE-Broadcast on the network as well as various video delivery metrics. In that study, published two years ago, we provided strong proof that the crossover point in efficiency between LTE-B and unicast occurs with a vew low number of subscribers (in the very low single digits).

The Results.  The results of this eMBMS benchmark study prove there are substantial improvements in the video quality with LTE-B versus unicast. Further, we only needed to use a handful of smartphones to document the improvements. Without question, in venues where there is a large number of people watching the same video content, the benefits of LTE-B on the user experience will be even more pronounced.