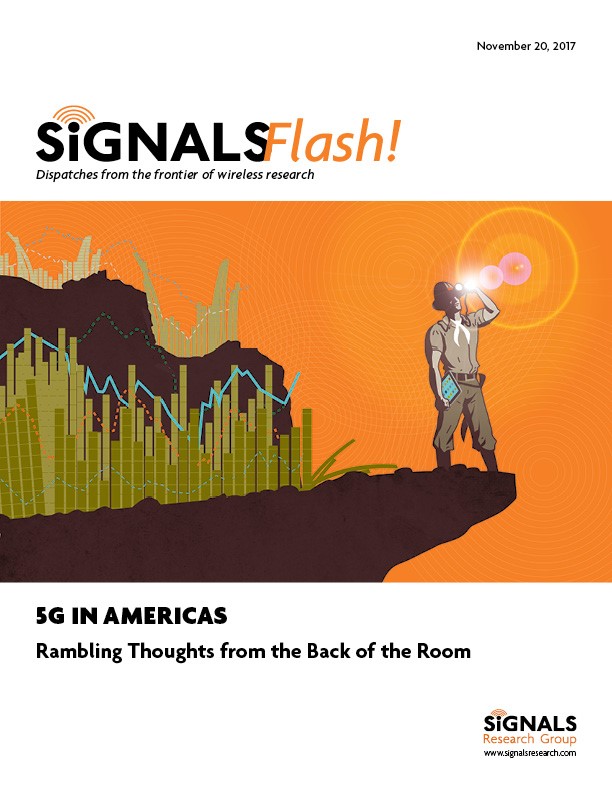 Rambling Thoughts from the Back of the Room

Recently, we attended the 5G America’s analyst workshop in Plano, Texas. We offer some rambling thoughts based on attending the event, along with our perspectives on some major news announcements that have taken place since that trip. We’ll be back in a couple weeks with our next in-depth Signals Ahead report – another benchmark study that we are conducting in our backyard.

As always, unlike our subscription-based Signals Ahead reports, you may forward this Signals Flash! report to whomever you want.

CBRS – Much Ado About Not Very Much.  The FCC is heading in the right direction with how it might regulate the spectrum. However, unless you are a WISP or a private entity looking to deploy a localized BWA service, we don’t see too many reasons to get excited.

Handicapping the 5G Race.  Millimeter wave networks will be geographically challenged, 600 MHz won’t scale or differentiate from LTE, Band 41 may be the most promising, but this isn’t saying much. Can network virtualization make a winner?

It makes no Cents! Contrary to widespread belief,  5G won’t be a new revenue opportunity for operators – at least in the near term. The vertical markets need to get on board while URLLC will lag eMBB and prove far more difficult to deploy.

It makes no Sense!  Broadcom may have its own rationale for wanting to acquire Qualcomm, but the companies are diametrically opposite, or they completely overlap each other. Regulatory hurdles would be impossible to overcome, especially outside of the US.