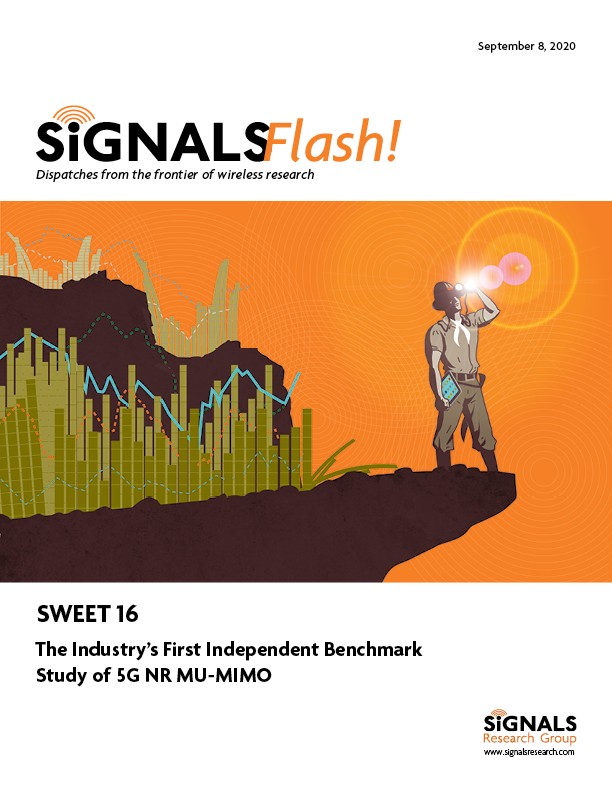 SRG conducted the industry’s first independent benchmark study of 5G NR MU-MIMO using a test network (100 MHz @ Band n78) on the Ericsson campus in Plano, TX. Ericsson provided critical logistical support but provided no financial compensation. SRG had the proverbial “keys to the castle” so we decided when, where and how we tested throughout the week.

Our Thanks.  We did this study in collaboration with Accuver Americas and Rohde & Schwarz who provided us with their respective test equipment and platforms, which we identify in the report. SRG did all the testing and analysis of the data and we are solely responsible for the commentary in the report.

Multiple Records Set.  Using 8 GemTek CPEs, SRG documented peak sector throughput of 5.4 Gbps (54 bps/Hz), due entirely to the 16 spatial layers offered by MU-MIMO. We did all this on days when temperatures soared well over 100° F, hitting a high of 110° F.

MU-MIMO versus Massive MIMO.  Although operators use Massive MIMO with their mid-band and millimeter wave 5G deployments, to the best of our knowledge no operator in the world has enabled 5G NR MU-MIMO beyond a few trial cell sites and in a multi-vendor environment with infrastructure, devices, and chipsets coming from different suppliers.

Stay Tuned.  Operators with mid-band 5G NR spectrum (2.5 GHz and higher) will start deploying MU-MIMO, based on CSI-RS, later this year to increase spectral efficiency as their networks become loaded. The SRS variant of MU-MIMO will follow in the next six to twelve months, depending on market requirements and vendor support