The Mother of all Network Benchmark Tests - Volume 3 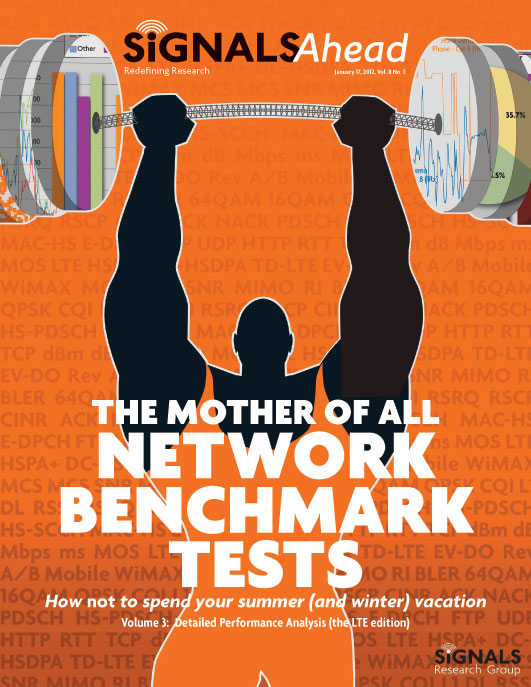 The Mother of all Network Benchmark Tests - Volume 3

How Not to Spend Your Summer (and Winter) Vacation Volume 3: Detailed Performance Analysis (the LTE edition)

Detailed analysis of LTE performance by operator and by vendor

Over the last several months we have been conducting a network/technology benchmark study of all of the leading next-generation wireless technologies, as exemplified by operator deployments in North America. We are now releasing Volume 1 of a three-part series of reports that we will be publishing over the next couple of months as part of a subscription to Signals Ahead. This effort was done in collaboration with Accuver, who provided us with its robust suite of drive test tools, including its XCAL-MO network benchmarking tool, which we used to simultaneously test with relative ease all of the networks/technologies featured in this report.

Key Takeaways (among many) include the following:

By and large, all technologies performed as expected and as advertised by the operators. However, none of them qualify as IMT-Advanced technologies. Operators control their own destiny and the decisions that hey make can greatly alter the performance capabilities of their chosen network technology. We identified several key shortcomings in certain operator deployments which had a meaningful impact on performance relative to the capabilities of the technology. Latency is an area where all technologies/networks could show meaningful improvement – a mere 40ms of latency separates the best performing technology from the worst performing technology. Interestingly, we observed the lowest latency (27ms) on T-Mobile’s DC-HSDPA network – during early morning rush hour traffic. The performance of the network depends on the capabilities of the chipset/device, which in some cases we found to be lacking. Once normalized for channel bandwidth and MIMO, not to mention taking into consideration network loading, the performance differences across all technologies were relatively modest in the downlink. In a few cases, DC-HSDPA outperformed LTE, even without making these adjustments and EV-DO Rev A outperformed HSPA+. Uplink throughput is an area where LTE generally has a big advantage over its peers. AT&T’s LTE network, as exemplified by its performance in Houston, was markedly better than the Verizon Wireless network. HOWEVER, much of this advantage can be readily explained and it will not as evident in at least some other markets, while in some markets certain KPIs will favor Verizon Wireless. FURTHER, we disagree with the notion that network loading is an issue at this time on the Verizon Wireless network – at least when it came to our test methodology and results. In fact, we argue that the overall performance on both LTE networks could be markedly better in the future than it is today, even if LTE network traffic increases as expected. Much has to do with the hoped-for maturity of the LTE ecosystem and operator initiatives to improve the performance of their networks.