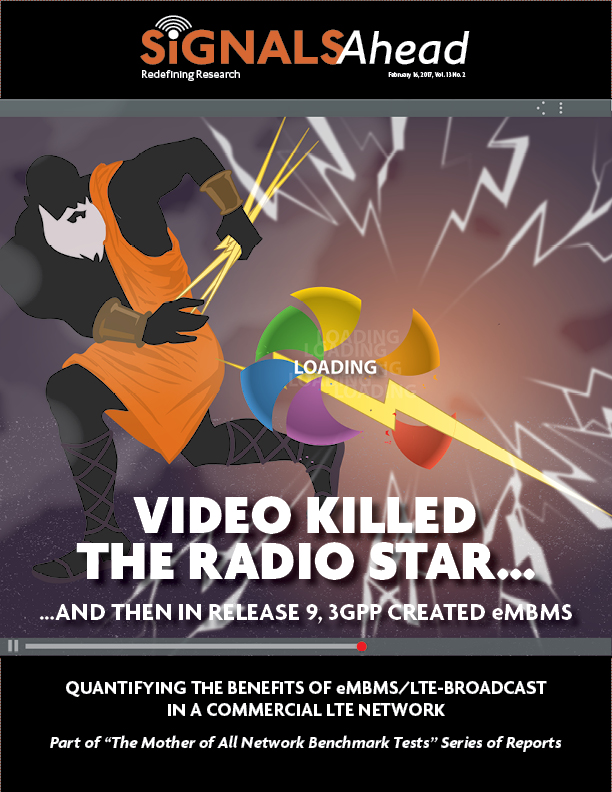 In this Signals Ahead report we provide results from the industry’s first and only independent benchmark study of unicast and eMBMS, including both video performance and the impact on the network. For this study we used the Telstra commercial LTE network in Australia where Ericsson is the infrastructure supplier.

Our Thanks. This study could not have been done without the support of Spirent Communications and Accuver Americas. These companies provided us with the test equipment that we used to evaluate the video delivery performance of eMBMS and unicast (Spirent Communications – Chromatic test platform), as well as the impact on the network (Accuver – XCAL and XCAP).

Our Approach. We tested simultaneously with two different smartphones within a MBSFN Service Area located just outside of Sydney (Band 28). The Galaxy S5 smartphone supported eMBMS and the Galaxy S7 streamed a video using unicast, including direct streaming via VLC for Android and YouTube.

The KPIs. For video performance we analyzed the observed frame rate, including video freezes, video impairments, and A/V synchronization. For the network analysis, we focused primarily on SINR/SNR, resource block (RB) utilization, and sub-frame allocations.

The Jury is In. Although the eMBMS market has been slow to develop, it has nothing to do with the technical merits of eMBMS. We identified and quantified substantial differences between the eMBMS SNR and the unicast SINR, thereby validating the merits of SFN (single frequency network). Most importantly, we document how the business case for eMBMS is justified with very, very few broadcast subscribers in each cell within the MBSFN Service Area.

Barcelona and then Croatia. We are soon headed off to Barcelona and a week at MWC. We then head to Croatia for RAN#75, where 5G should move from a study item to a work item.