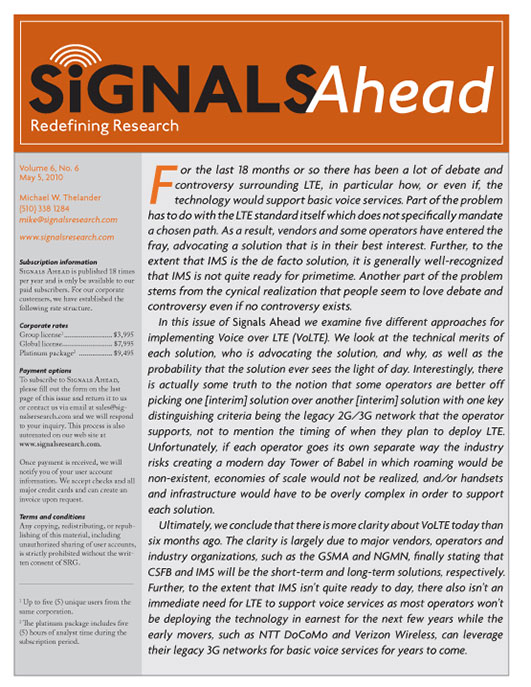 For the last 18 months or so there has been a lot of debate and controversy surrounding LTE, in particular how, or even if, the technology would support basic voice services. Part of the problem has to do with the LTE standard itself which does not specifically mandate a chosen path. As a result, vendors and some operators have entered the fray, advocating a solution that is in their best interest. Further, to the extent that IMS is the de facto solution, it is generally well-recognized that IMS is not quite ready for primetime. Another part of the problem stems from the cynical realization that people seem to love debate and controversy even if no controversy exists.

In this issue of Signals Aheadwe examine five different approaches for implementing Voice over LTE (VoLTE). We look at the technical merits of each solution, who is advocating the solution, and why, as well as the probability that the solution ever sees the light of day. Interestingly, there is actually some truth to the notion that some operators are better off picking one [interim] solution over another [interim] solution with one key distinguishing criteria being the legacy 2G/3G network that the operator supports, not to mention the timing of when they plan to deploy LTE. Unfortunately, if each operator goes its own separate way the industry risks creating a modern day Tower of Babel in which roaming would be non-existent, economies of scale would not be realized, and/or handsets and infrastructure would have to be overly complex in order to support each solution.