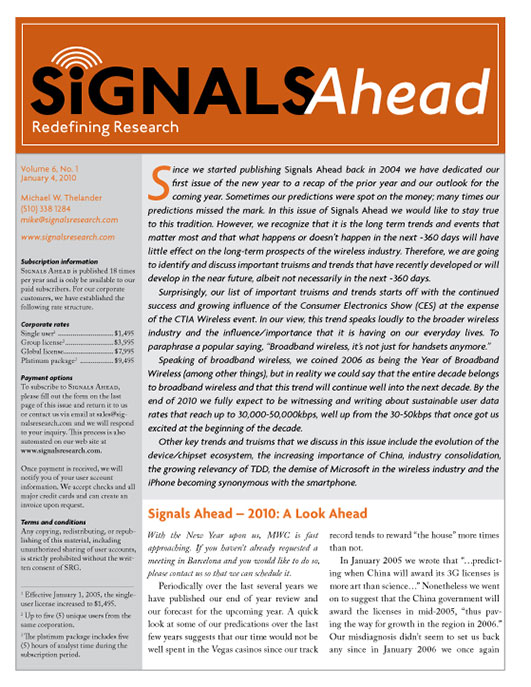 A look at trends and truisms in the cellular industry

Since we started publishing Signals Ahead back in 2004 we have dedicated our first issue of the new year to a recap of the prior year and our outlook for the coming year. Sometimes our predictions were spot on the money; many times our predictions missed the mark. In this issue of Signals Ahead we would like to stay true to this tradition. However, we recognize that it is the long term trends and events that matter most and that what happens or doesn’t happen in the next ~360 days will have little effect on the long-term prospects of the wireless industry. Therefore, we are going to identify and discuss important truisms and trends that have recently developed or will develop in the near future, albeit not necessarily in the next ~360 days.

Surprisingly, our list of important truisms and trends starts off with the continued success and growing influence of the Consumer Electronics Show (CES) at the expense of the CTIA Wireless event. In our view, this trend speaks loudly to the broader wireless industry and the influence/importance that it is having on our everyday lives. To paraphrase a popular saying, ‘Broadband wireless, it’s not just for handsets anymore.’ Speaking of broadband wireless, we coined 2006 as being the Year of Broadband Wireless (among other things), but in reality we could say that the entire decade belongs to broadband wireless and that this trend will continue well into the next decade.

By the end of 2010 we fully expect to be witnessing and writing about sustainable user data rates that reach up to 30,000-50,000kbps, well up from the 30-50kbps that once got us excited at the beginning of the decade. Other key trends and truisms that we discuss in this issue include the evolution of the device/chipset ecosystem, the increasing importance of China, industry consolidation, the growing relevancy of TDD, the demise of Microsoft in the wireless industry and the iPhone becoming synonymous with the smartphone.