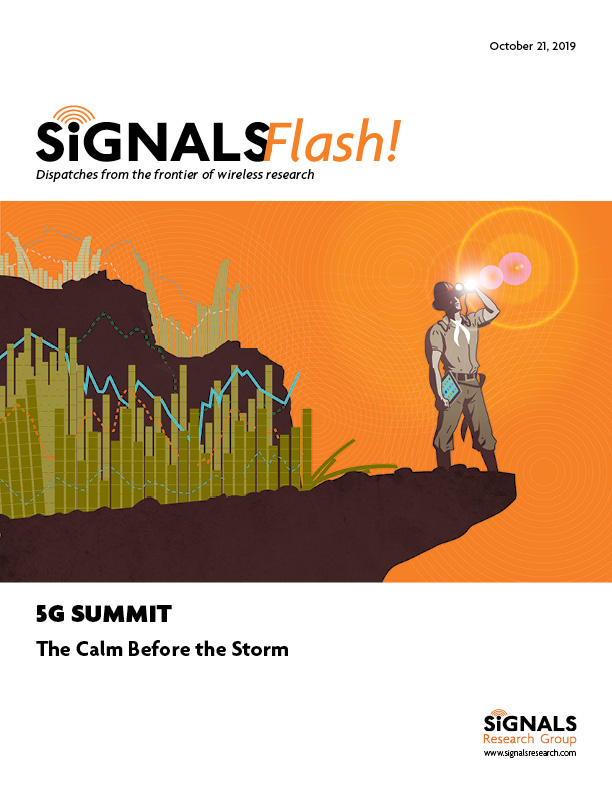 The Calm Before the Storm

Key Highlights Include the Following:

Smooth Sailing. Not surprisingly, vendors felt the transition from LTE to 5G went relatively smoothly.  Market hype helped since it drove the ecosystem of device suppliers who didn’t want to get left behind.  We tend to agree, but if the commercialization of 5G was really that easy, EN-DC with split bearer functionality would work great and we’d already have operators using 8×100 MHz radio channels in millimeter wave bands.

DSS and FDD. There is HUGE excitement for DSS (dynamic spectrum sharing), whereby LTE and 5G share the same radio channel with the allocation of resource blocks based on the relative amount of traffic on the two Gs.  DSS allows operators to quickly light-up their FDD spectrum, which is being used today for LTE.  Long-term benefits are great (discussed in this report), but the near-term benefits are limited to a 5G icon and the placebo effect.

It’s the Verticals, Baby! New vertical markets are interested in 5G.  In addition to the automotive industry (C-V2X) there is the enterprise, industrial automation, including public and private networks.  Private networks represent an early entry point for the SA (Standalone) architecture option.

Look to Asia. Initial millimeter wave launches in Asia (South Korea and Japan) are happening next year, although we believe more aggressively in South Korea.  Dense cell grids and high consumer expectations could result in killer performance.  Pack the bags, we’re headed back to Seoul or Tokyo.

A Brief Hiatus.  Due to various factors, we’re a bit late in getting out the next Signals Ahead report.  Planned topics include indoor millimeter wave performance (VZ at US Bank Stadium) and Sprint’s 5G network (LG V50 vs Galaxy S10).