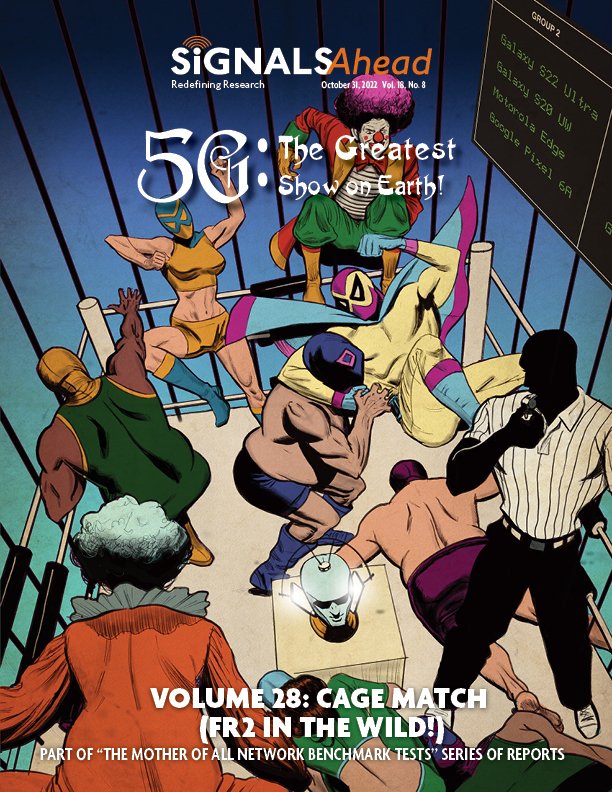 SRG just completed its 28th 5G benchmark study.  For this endeavor we collaborated with Accuver Americas and Spirent Communications to conduct an independent benchmark study of several 5G mmWave smartphones with chipsets from MediaTek, Qualcomm, and Samsung.

Our Thanks.  We did this study in collaboration with Accuver Americas (XCAL-M, XCAL-Solo and XCAP) and Spirent Communications (Umetrix Data).  SRG is responsible for the data collection and all analysis and commentary provided in this report.

Our Methodology.  Testing took place on the Verizon Wireless network in downtown Minneapolis.  The network is comprised of 400 MHz in the downlink and 200 MHz in the uplink.  We did walk testing with individual phones and two phones in tandem, using the Galaxy S22 Ultra as the comparative model.  We also looked at current efficiency or the amount of current required to deliver the achieved throughput.  These tests occurred while stationary.  We also included current efficiency tests using LTE, Wi-Fi and mid-band 5G for comparison purposes.

The Scope.  We used the Galaxy S22, Galaxy S22 Ultra, Google PIxel and Motorola edge (2022) smartphones, as well as the Galaxy S20 UW as a legacy smartphone for comparison purposes.  These smartphones represent 5G chipsets from MediaTek, Qualcomm and Samsung.  GIven some limitations in logging detailed chipset data, we included a mix of physical layer and application layer results in our analysis

Significant Gains since 2019.  We documented a 180% gain in current efficiency relative to testing we did back in 2019 using the Galaxy S10 smartphone.  The gains were due to a mix of higher throughput and lower current drain.  Further, today’s mmWave networks now support up to 800 MHz in the downlink and 200 MHz in the uplink (the latter supported by all phones we tested), while previously the uplink data went over LTE.

Price Does Not Equal Performance.  More expensive smartphones do not necessarily deliver better performance with the entry-level/mid-tier Motorola edge (2022) more than holding its own against the Galaxy S22 Ultra.  However, the Google Pixel 6a lagged its peers in all categories.

Current Efficiency is Nuanced.  Although Wi-Fi can and should achieve better current efficiency than 5G mmWave, this outcome didn’t always occur.  Much depends on the ISP / service plan associated with the Wi-Fi AP.  Not everyone has access to a 1 Gbps connection, especially at public venues.