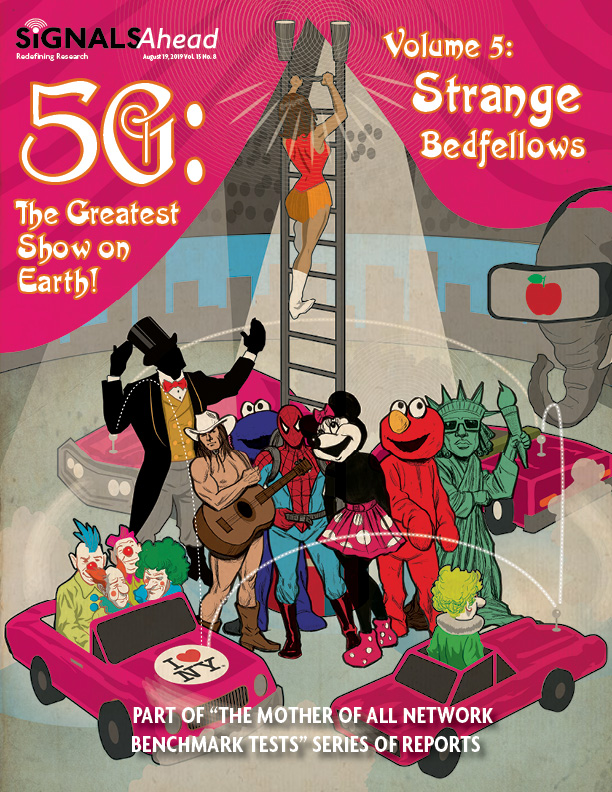 SRG conducted a benchmark study of the T-Mobile 5G NR network in New York City where the operator has deployed the technology at 28 GHz (Band n257) along with LAA in Band 46.

Our Methodology.  We captured chipset diagnostic messages from two Galaxy S10 smartphones. We rotated between phones and tested in parallel with one phone locked to LTE-Only.  We focused on pedestrian tests with UDP data transfers to determine network performance and the synergies between 5G NR and LAA.

LAA Synergies.  Although concurrent use of 5G NR and LAA isn’t possible, the Galaxy S10 can move between the two air interfaces with LAA providing extended coverage where 5G NR isn’t present. LAA, based on our analysis, also delivers higher spectral efficiency than 5G NR, albeit with lower data speeds due to the limited channel bandwidth. LAA paves the way for 5G NR-U, which includes support for uplink transmissions and standalone mode of operation (no anchor carrier in licensed spectrum).

Thermal RLFs.  We addressed this topic in an earlier Signals Flash, but we provide additional insight in this report.  Since publishing that report, we had the opportunity to use two other 5G NR smartphones with the Qualcomm modem.  Log files that we have analyzed do not show a single thermal RLF.  We also note that while the problem is real with the V50 and S10, we believe the magnitude of the problem is overstated since other situations can make it appear like a thermal RLF has occurred.

The Improvements.  The biggest improvement since testing 5G NR (FR2) in April is that the T-Mobile/Ericsson network supports EN-DC with dual bearers, meaning simultaneous user plane data traffic over LTE and 5G NR.  Uplink traffic remains entirely on 5G NR.  Handovers between beam indices and between cell PCIs occur much faster than they did in April when there was a 2 to 5 second handover delay during which time the traffic went over LTE.

Areas of Opportunity.  Separate from the thermal RLFs, big improvements in 5G NR performance can come from better mappings of LTE PCIs used for the 5G NR anchor and increased uplink coverage. The former seems relatively straightforward while the latter can get addressed with 5G NR in FR1 and pending R16 features.