A 450x Variance in Channel Bandwidth 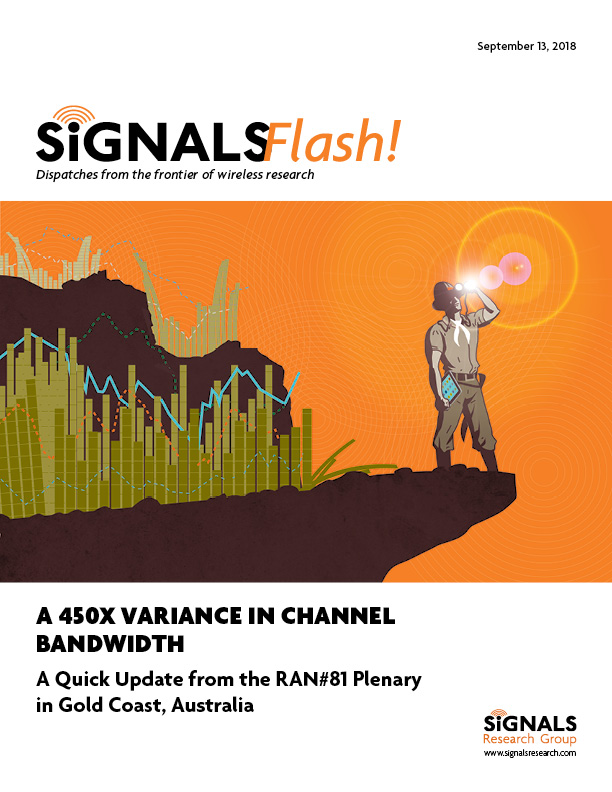 A 450x Variance in Channel Bandwidth

A Quick Update from the RAN#81 Plenary in Gold Coast, Australia

This week (September 10-13) we are attending the RAN#81 Plenary in Gold Coast, Australia. With the “completion” of Release 15 back in June (Option 2) and the next major milestones occurring in December, this plenary wasn’t nearly as eventful or time consuming, compared with all previous plenaries that we have attended.

Following the completion of the entire Plenary and a 30-hour journey home, we will publish a far more detailed synopsis in our Signals Ahead series of reports. As always, unlike our subscription-based Signals Ahead reports, you may forward this Signals Flash! report to whomever you want.

Getting Ready for the ITU.  Before Release 15 and Release 16 become IMT-2020, 3GPP needs to prove that the standard meets the numerous requirements which exist. Earlier work, including simulation modeling by individual companies, provides great insight into the likely capabilities of Release 15 and Release 16 for both LTE and 5G NR air interfaces.
The Verticals are in the House. Although the automotive and industrial automation industry didn’t necessarily show up in force Down Under, they are making their presence known and having influence on the standardization process. If nothing else, this participation bodes well for the eventual adoption of 5G by these very same industries.

A Bit of Controversy.  It wouldn’t be a RAN plenary without a bit of controversy, and RAN#81 didn’t disappoint. Controversies include Release 15 5G + LTE device functionality (largely uplink related), frequency band pairings, LAA coexistence, and even a couple of marketing-related matters.

Release 17.  Just when 3GPP delegates thought they could retire, along comes Release 17. The SA plenary has already started defining likely functionality with RAN and SA using the upcoming December meeting to establish a timeline.

So Long Summer, Hello Benchmarking. Admittedly, we’ve been taking it easy w.r.t. our benchmark testing over the last few months. Rest assured, with all the market activities and other ongoing studies that we’ve been facilitating over the last month, there will be plenty of late-night Signals Ahead reading in the coming months. Patience is a virtue.