Brush off the dust and cobwebs 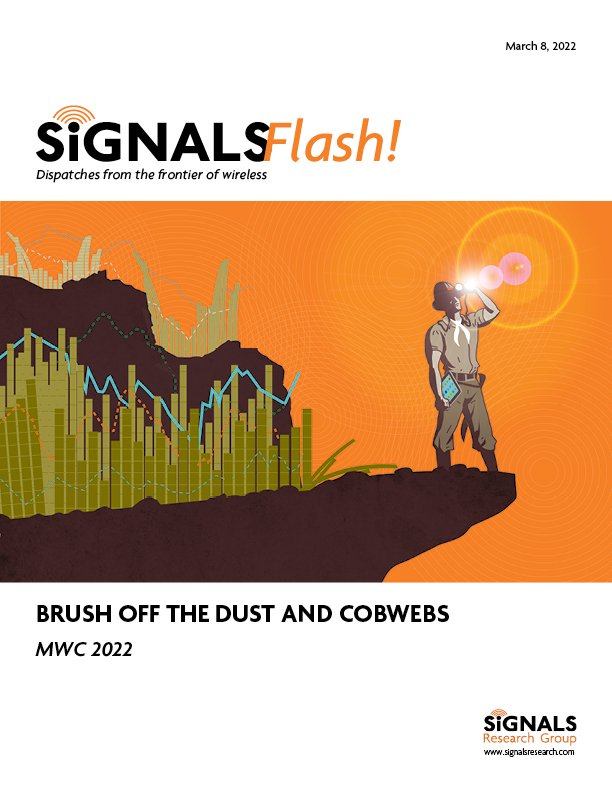 Brush off the dust and cobwebs

SRG spent the week in Barcelona where we attended Mobile World Congress (MWC) 2022.  In this Signals Flash report we highlight some of the key takeaways from the event.

Advancing 5G Performance.  Thankfully, 6G didn’t have a big presence this year, but there were several companies touting enhanced 5G performance, both in the near term and in subsequent years.  Examples include MU-MIMO and DSS improvements, beam nulling, new carrier aggregation combinations, and better channel state estimates to improve capacity and to potentially better facilitate MU-MIMO and concurrent waveforms in the same radio channel.

“New” Attendees.  In 2006 or thereabouts the little “Android” booth appeared at MWC, followed by a continued growing presence on the part of Google.  Three companies stood out for their presence this year, all with considerable financial might and a similar vision of where they want the telco world to head

Energy Efficiency. Lots of focus on driving down energy costs with green cell sites that respond according to network traffic and liquid cooled 5G base stations.

Metaverse.  Although the Metaverse will be a reality, it will take time before widescale 5G networks will be able to deliver on the goods.  Current headsets / goggles are at least one generation away from being what is needed to make it a commercial success.

Open RAN.  Open RAN is here to stay but it doesn’t mean a rising tide will lift all ships.  The initial vision of Open RAN will be much different than what we end up with.  There are also some inevitable hurdles that operators and vendors will need to overcome, both now and on an ongoing basis.

New 5G Use Cases.  Operators are beginning to dabble in new 5G use cases, including V2X, drones, and private networks.  The noteworthy part is that much of this work is taking place under the auspices of good old LTE.  Release 16 functionality is still waiting in the wings.