Can you schedule me now? 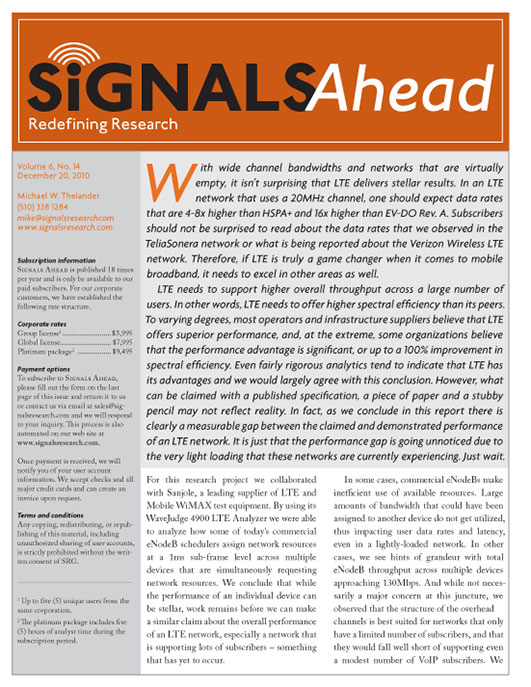 Can you schedule me now?

With 2x10MHz or 2x20MHz of spectrum and an unloaded network, LTE can deliver incredibly high individual user data rates. At a minimum the data rates should be 8x higher than what is possible with HSPA+ (4x with MIMO) and 16x the data rates achieved with EV-DO Rev A. If LTE is to be a key differentiator that it must also support a large number of users, each consuming a more modest amount of bandwidth. This requirement is especially important for applications, such as VoIP. Unfortunately, while today’s LTE networks deliver very high individual data rates, they do not necessarily do so in an efficient manner. Without the proper test equipment, these inefficiencies could go unnoticed until the network started experiencing higher volumes of traffic. For this research project we collaborated with Sanjole, a leading supplier of LTE and Mobile WiMAX test equipment. By using its WaveJudge 4900 LTE Analyzer we were able to analyze how some of today’s commercial eNodeB schedulers assign network resources at a 1ms sub-frame level across multiple devices that are simultaneously requesting network resources. We conclude that while the performance of an individual device can be stellar, work remains before we can make a similar claim about the overall performance of an LTE network, especially a network that is supporting lots of subscribers – something that has yet to occur. Further, it is possible to demonstrate that the user experience is being impacted in the form of higher latency and lower data rates, even in lightly loaded network. It is just that the user isn’t aware it is occurring.