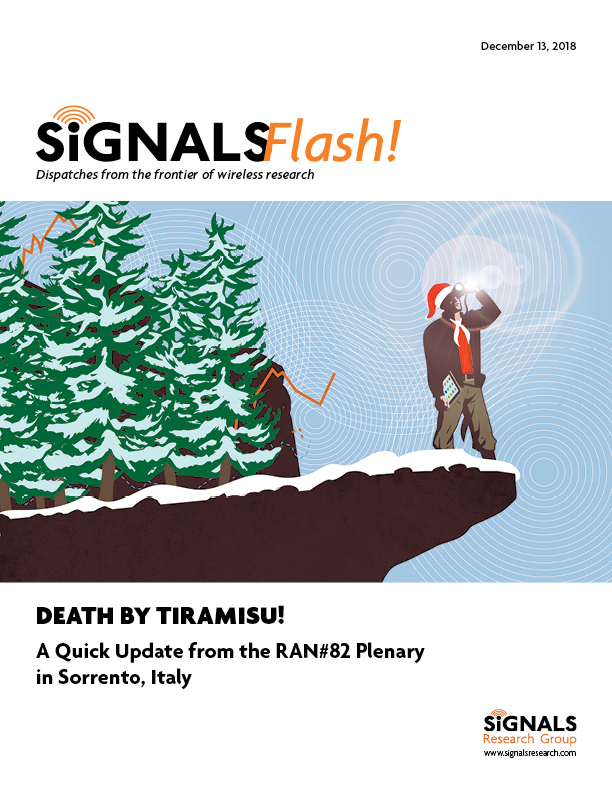 A Quick Update from the RAN#82 Plenary in Sorrento, Italy

This week (December 10-13) we are attending the RAN#82 Plenary in Sorrento, Italy. This trip follows on the heels of Qualcomm’s Snapdragon event in Maui. In this Signals Flash!, we provide our thoughts based on attending these two events, with a particular focus on Release 15, both from a standardization perspective and from a market / technology maturity point of view.

Maturity is in the Eye of the Beholder.  Much was made about incompatibilities between the September ASN.1 and earlier versions of the specifications. While true, albeit overblown, the existence of incompatibilities is not surprising. Furthermore, vendors will need to implement the dozens and dozens of more recent change requests, which have occurred in the last three months and which will likely continue to emerge for the near future.

Patience is a Virtue.  2018-2019 may mark the start of the 5G era, but the 5G of 2019 won’t look anything like the 5G of the future. Evolution doesn’t happen overnight, vendors need to implement Release 15 CRs and enable functionality which makes 5G easier to deploy, while critical Release 16 functionality and the SA (standalone) network architecture are needed to achieve everything that 5G aspires to be.

Release 16 Update.  While we’ll cover this topic in more detail in our Signals Flash, much time was spent defining, redefining, and approving / disapproving / delaying Release 16 study items and work items for both LTE and 5G NR. Given where things stand with Release 15, 3GPP will not finish Release 16 according to the original schedule. A 3-month slip is in the works.