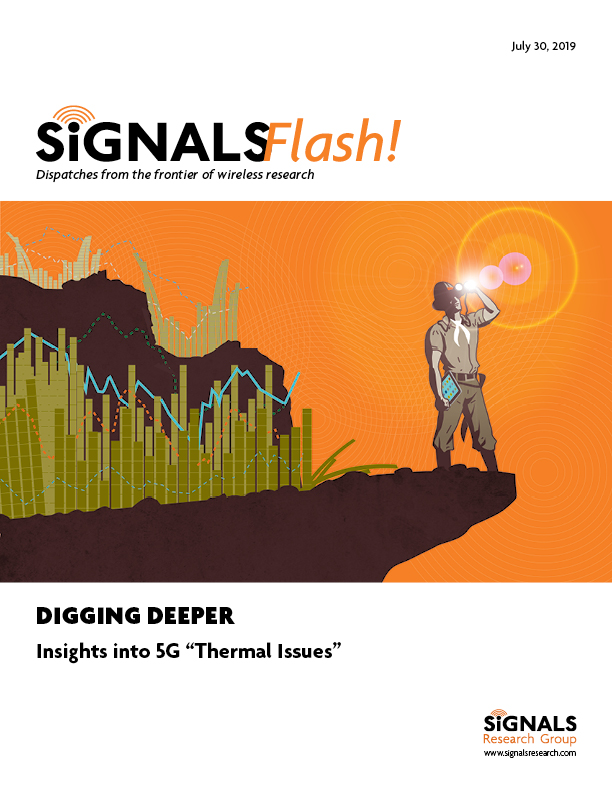 Although it is evident to us there is a “thermal issue” that is currently impacting at least some 5G smartphones – we’ve seen it with the LG V50 in South Korea and more recently with the Samsung Galaxy S10 in the US – we’ve determined that the problem isn’t always what it appears to be.

Our Thanks.  This ongoing study would not be possible without the invaluable support of two of our test equipment partners, specifically Accuver Americas and Spirent Communications.
Thermal Issues Do Exist. We show snippets of results, which clearly demonstrate the smartphones report an RLF (Radio Link Failure) due to “Thermal” at which point the phones stop using the 5G NR radio bearer.

A Bit Suspect.  If the 5G circuitry was hot enough that it needed to turn itself off, and if it was due to 5G activity, then it should take more than a couple seconds of 5G connectivity with very low throughput for it to happen (something we observed and document in this report). Furthermore, in our nearly two decades of doing this type of testing we’ve encountered phones that have gotten truly hot, yet with some rare exceptions they continued to work. In our most recent testing, our two Galaxy S10 smartphones (one locked to LTE) were only warm to the touch with no discernable difference in temperature between the two phones, which were running concurrently during some of our tests.

Other Factors.  In this Signals Flash we show other factors which can make it seem like the phone disabled the 5G radio. We also point out the 5G icon displayed on the smartphone is an extremely poor indicator of which radio bearer the phone is using. The only reliable means is to examine physical layer parameters, such as the physical layer throughput, to determine if the user plane traffic is going over 5G, LTE, 5G + LTE, or LTE with LAA.

Coming Soon.  We’ll have the full Signals Ahead report out later this month. The report will focus on the complementary roles of 5G NR, LTE and LAA (License Assisted Access). Although it has received little, if any attention, a smartphone receiving data over T-Mobile’s 5G network is also receiving simultaneous data on up to two LTE carriers. Additionally, when the smartphone isn’t using 5G NR, it can tap into the operator’s LAA coverage.