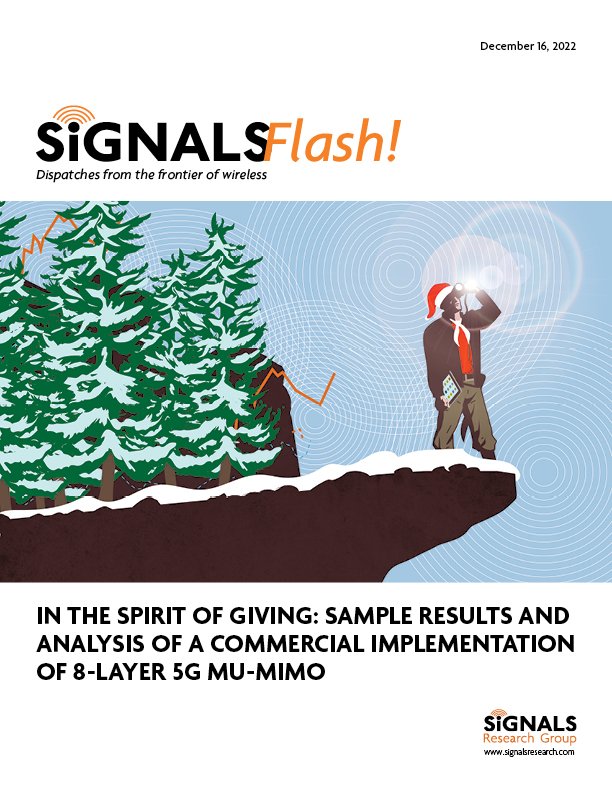 In the Spirit of Giving: Sample Results and Analysis of a Commercial Implementation of 8-Layer 5G MU-MIMO

SRG just completed the industry’s first independent benchmark study of 8-layer 5G MU-MIMO (Multi-User MIMO) in a commercial network (T-Mobile Band n41) while using a mix of commercial and precommercial devices.  This report contains results and analysis from a single test that we conducted at the T-Mobile facilities in Irvine, CA prior to doing more extensive testing in a number of commercial cell sites.

Our Thanks.  We did this study with the support of Accuver Americas (XCAL5 and XCAP) and Spirent Communications (Umetrix Data).  SRG is fully responsible for the data collection and all analysis and commentary provided in this report.

8 Layers Achieved.  Thanks to SRS-based MU-MIMO, we frequently achieved simultaneous pairing across all four phones, resulting in a 76% increase in the MIMO layer count/RB usage relative to what is possible with 4×4 SU-MIMO.  We explain.

Throughput and Spectral Efficiency.  Total average throughput on the Band n41 100 MHz P Cell was 2.4 Gbps, or 82% higher than what we observed with a single UE doing 4×4 SU-MIMO.  Doing the math, the downlink spectral efficiency was a very impressive 29.6 bps/Hz.

Stay Tuned.  We previously wrote that MU-MIMO can be a game changer for fixed wireless access.  We haven’t yet analyzed other test results, but we collected the data, and we observed the impact of disabling MU-MIMO/SRS in the network.  Suffice it to say, we’re on track to confirming our hypothesis.