YES VIRGINIA, THERE IS AN APPROVED OPTION 3 NSA EARLY DROP 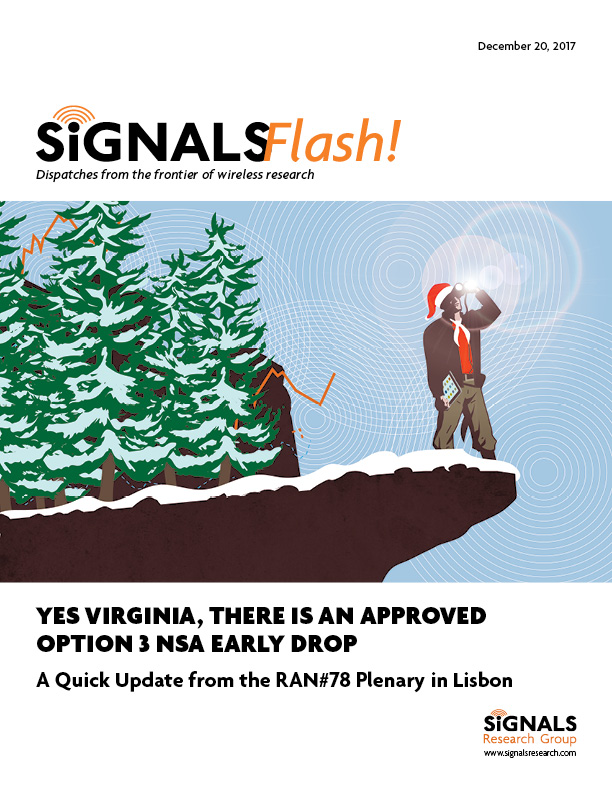 YES VIRGINIA, THERE IS AN APPROVED OPTION 3 NSA EARLY DROP

A Quick Update from the RAN #78 Plenary in Lisbon

This week we are attending the RAN#78 Plenary in Lisbon, Portugal.  SRG has attended 3GPP meetings since the 5G standardization work started in late 2015 and we’ve been a member company of 3GPP since 2016.  Given the importance of this meeting w.r.t. the anticipated completion and acceptance of Option 3 NSA as an early drop of the Release 15 specification, we decided to issue a very quick Signals Flash, based on where things stand at this time.  Following the completion of the entire Plenary, we will publish a far more detailed synopsis in our Signals Ahead series of reports.

It’s Approved.  It should come as no surprise that 3GPP approved the set of specifications which define the Non-Standalone (NSA) architecture option, which leverages the LTE and NR air interfaces, as well as the existing LTE core network (EPC), since the writing was on the wall back in March when 3GPP initially established the goal.