Verizon and T-Mobile both held lengthy analyst events last week, and both claimed that their particular flavor of midband 5G was superior. The truth, though, appears to lie somewhere in the middle.

Verizon kicked things off last week by starting its analyst event at the exact minute that the “quiet period” ended for the FCC’s C-band spectrum auction. And Verizon released a chart indicating that transmissions in its new midband C-band spectrum holdings would travel just a bit farther than transmissions in the midband 2.5GHz spectrum that T-Mobile is using for its 5G buildout.

Verizon said transmissions in its C-band spectrum could travel farther than transmissions in the EBS/BRS spectrum band, which is the 2.5GHz band T-Mobile is using for its midband 5G network. Click here for a larger version of this image.
(Source: Verizon)

Not to be outdone, T-Mobile released a chart of its own during Verizon’s investor event showing the opposite: That signals in its 2.5GHz holdings actually travel much farther than signals in Verizon’s C-band holdings. 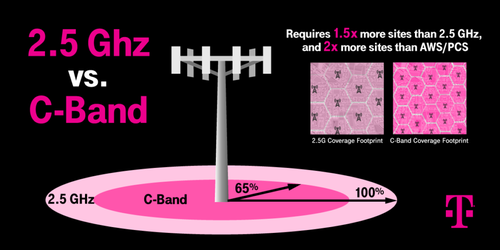 T-Mobile said C-band transmissions can only travel 65% of the distance of transmissions in its 2.5GHz band. Click here for a larger version of this image.
(Source: T-Mobile)

As T-Mobile executives are fond of saying, it’s a question of “miles versus meters.”

In general, signals in higher spectrum bands don’t travel, or propagate, as far as signals in lower spectrum bands. The C-band sits between 3.7GHz and 3.98GHz, far above T-Mobile’s 2.5GHz. Thus, it stands to reason that Verizon will need far more transmission sites to cover the same geographic area with its flavor of midband 5G than T-Mobile will – if indeed T-Mobile is correct in claiming that signals in its 2.5GHz spectrum propagate farther.

“Both operators are right and wrong – they are just trying to show things from their competitive advantage,” explained Michael Thelander of research and consulting firm Signals Research Group. “Ultimately, I don’t think operators will build tons of new [transmission] sites for 3.5GHz since it wouldn’t make sense economically or practically. Instead, they will try to leverage existing sites as much as possible and then perhaps suffer coverage problems in at least the short term as they deploy new sites when possible.”

Importantly, Verizon said that it will not have to build more cell sites to deploy a widespread C-band network. The analysts at New Street Research estimate that Verizon counts 68,000 cell sites. T-Mobile, though, said it will continue to implement the network-upgrade project it launched following the close of its merger with Sprint, which will include the operator decommissioning 35,000 cell sites to end the program with a grand total of 85,000 cell sites.

After this article was published, Verizon provided more details on its calculations: “In terms of raw text book physics, yes EBS/BRS has greater reach and coverage. Roughly 25%. But raw textbook physics alone do not translate into real world deployments,” the operator wrote to Light Reading. “Real world deployment is a function/combination of the raw physics, FCC use rules and power restrictions.”

Continued Verizon: “On the transmit side, EBS/ BRS [which is T-Mobile’s 2.5GHz] has power limitations that increase or get more punitive as an operator widens the beam width. It is most pronounced in rural areas where the difference in power output on C-band more than makes up for the physics difference between the two bands. Power output for C-band vs EBS/BRS in rural markets is ~28% better vs the underlying physics headwinds of (~25%). Punch line is C-band coverage is equal to or slightly better than EBS/BRS.”

Another part of the issue, according to the analysts at New Street Research, is that midband spectrum like the C-band can be paired with lowband spectrum for uplink connections. That’s exactly what T-Mobile plans to do with its 600MHz spectrum. Indeed, the operator said it expects to improve the propagation of its midband 2.5GHz signals by up to 30% by pairing them with lowband 600MHz signals via carrier aggregation technology.

“We believe Verizon recognizes the advantage of pairing lower frequency uplinks with C-band downlinks to improve the reach of the C-band. So why aren’t they doing this with carrier aggregation the way T-Mobile is with 2.5GHz and 600MHz? We suspect it’s because they are spectrum constrained in bands below C-band; they don’t have enough unused uplink capacity on existing spectrum to support the uplink needs of their C-band portfolio,” argued the New Street analysts in a note to investors Monday.

As a result, the New Street analysts speculated that Verizon might turn to Ligado for its lowband spectrum needs.

“Ligado has 20-30MHz of supplemental uplink in the L-band that would pair perfectly with Verizon’s C-band. Pairing the L-band with the C-band would improve the reach of the C-band, bringing it closer to what T-Mobile can deliver with 2.5GHz,” they wrote. “In addition, they could allocate more resources to the downlink in C-band, if they used supplemental uplink, effectively giving themselves more capacity.”

But Verizon SVP Adam Koeppe flatly rejected that notion. Koeppe said that Verizon would be able to cover the “vast majority” of its ultimate C-band buildout target – 250 million people covered by 2024 – using its existing cell site locations. And he said the operator would do so via uplink and downlink connections inside its C-band holdings.

Koeppe also said Verizon doesn’t want to purchase Ligado’s L-band spectrum. “They’ve been peddling that asset for quite some time and nobody has pursued it, which speaks for itself,” he told Light Reading.

Again, Thelander argued the issue can be addressed by a number of different tactics and technologies.

“Massive MIMO (64T64R) can offset much of the penalty of 3.5GHz, although T-Mobile can do the same thing with 2.5GHz,” he wrote in response to questions from Light Reading. “In urban/dense urban areas operators have deployed additional cell sites for capacity so the existing cell grid is already denser than it needs to be for basic coverage purposes. Therefore, the existing cell grid gets closer to what is needed to support 3.5GHz and in some cases it is already sufficient.”

In the meantime, it’s likely that Verizon and T-Mobile will continue to feud over their respective midband holdings as they build out speedier 5G networks.